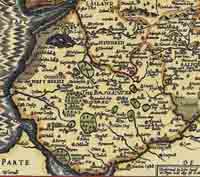 The area we cover is the West Derby Hundred in Lancashire, which is one of the six sub-divisions of the historic county of Lancashire. It's judicial centre was the township of West Derby.

The hundred is bounded on the west by the Irish Sea and River Mersey from Hesketh Bank on the Ribble estuary, round to Glazebrook on the Mersey, then north-west to Arley Hall.

From Arley Hall it's mainly divided from the Leyland hundred on the north by the River Douglas until near Rufford Old Hall, and from there through Martin Mere in a north-westerly direction back to Hesketh Bank.

The map shown on this page is an extract from Speeds 1610 map of Lancashire.